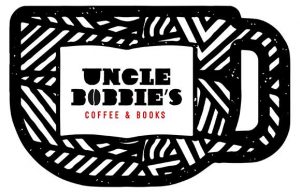 I walk in mostly because of the name. Uncle Bobbie’s Coffee & Books. An interesting, quirky name along with two of my favorite things, coffee and books. I like to walk around and make assumptions about the lives of people based on the books they’re reading. It’s pretty judgmental and elitist and reductive and lots of other arrogant adjectives, but hey, I think it’s fun. But as soon as I walk in, my quest for fun immediately turns into an experience of wonder and awe.

All Black everything. Everything is black. I’m not talking about the staff (who were also people of color), but the books. All of the books were written by black authors. Every book on every shelf. The self-help books. The political books. The comedies. The dramas. The comics. The sci-fi. Every book was written by a person of color. And these were not just the standard best-sellers written by the popular celebrities of today. These are books I’ve never heard of written by people I’ve never heard of. And this place is packed with people reading and talking about what they were reading. Black people reading books written by black writers. The thought of judging these people who were intellectually comforted within the walls of Uncle Bobbie’s never crossed my mind. Instead I wanted to hug them and ask where they’ve been all my life. Apparently, they’ve been right here reading in this book store. But they’re also in Barnes & Nobles. And they’re in Books-A-Million. They’re everywhere.

As I walked around Uncle Bobbie’s, unable to decide which book to grab first, I realized something; my love for books was not my love alone.

Millions of people share this love with me and that love is not limited by race, gender, religion, or sexual orientation. Everyone loves stories, and everyone has stories to tell. So why was I, an African-American man surprised to see so many other people of color reading? Why do I have, in my mind, this social construct that reading books and book clubs are geared only towards white people; specifically, white women? If everyone loves stories and has stories to tell, why do we only think of it being something exclusively for white people?

So why was I so shocked to see a predominately African-American book store with so many people of color grouped together discussing literature? It’s probably a fault of my own. Despite being black and being raised in a black family that read a lot, I allowed my perception to be molded by television where I did not see many African-Americans reading. Maybe I’ve been influenced by media outlets that portray the extent of African-Americans “reading” as having their miranda rights read to them. Maybe it’s the stories of black people having the police called on them for simply being in a library. Maybe I’ve been spending too much time watching television and feeling alone.

Maybe I should read more.

Maybe we all should.