Hear from Lauren Sullivan (’11) and former Villanova Theatre Box Office Manager Ryan Kirchner (’11). Lauren may not have been able to score tickets to Metamorphoses, but little did she know she would be scoring her husband in the process.

Lauren: Ryan and I met at Villanova in ACS class in CEER, or in statistics class in Mendel, or in Second Storey, or in the Vasey box office. While we seem to have been in the same place at the same time before we actually remember meeting, what brought us together was Villanova’s production of Ovid’s Metamorphoses. Ryan worked in the box office. My roommate and I had wanted to see the production, so we went to the box office one afternoon between classes in order to buy tickets. We were disheartened to learn that all performances were sold out. We couldn’t even stand in the back. (My roommate asked.) That evening, we went to Second Storey for dinner to kick off a friend’s birthday celebration. As our friend introduced everyone, my roommate leaned over to me and said with great disdain in her voice, “Lauren, is that the guy that wouldn’t give us tickets?” Yes; yes, it was. Since then, Ryan and I have seen countless performances together and are active in local community theaters. We even had the opportunity to play opposite each other as Mortimer and Elaine in a production of Arsenic and Old Lace. Cast members, not realizing that we were married, told us that we had great chemistry. Phew!

As our friend introduced everyone, my roommate leaned over to me and said with great disdain in her voice, “Lauren, is that the guy that wouldn’t give us tickets?” Yes; yes, it was.

Ryan and I married at Villanova in 2014. Fr. David Cregan, former chair of the Theater Department, was the Celebrant. (I’d love to say he was Emcee, but that just conjures up too many images from Cabaret.) We added a rescue puggle, Cliff Clavin, to our little Nova family last year. By the way, my roommate was the maid of honor at our wedding and simply adores Ryan, even though we never got those tickets. And that is our Vasey Story. 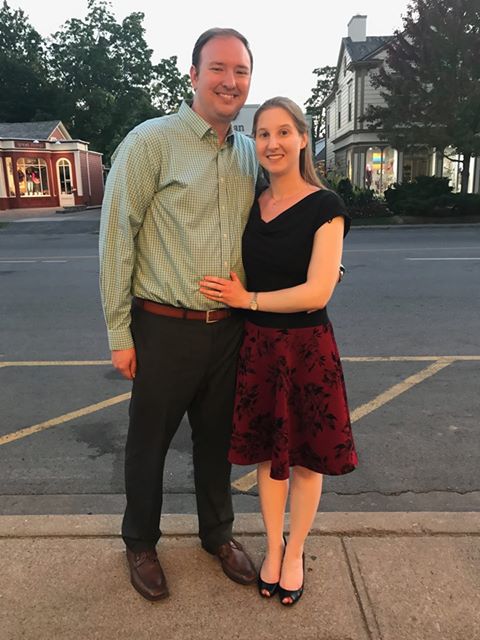