Hear from our artistic director, Michael Hollinger, about our production of Godspell and the choice to cast a woman in the role of Jesus:

Godspell is one of the most widely-produced musicals of the past half century, and many Americans have seen one or more productions of this beloved show.  (This is my fifth!)  Because games, role-play, and improvisation are at the heart of Godspell, the ancient story of Jesus and his disciples, as first told through the New Testament Gospels, still feels ever-new, and Stephen Schwartz’s heartfelt and exuberant score continues to stir the spirit.

Since its origins, the cast of Godspell has included both men and women, and a variety of ethnicities, underscoring the universality and inclusivity of Jesus’ message.  In recent years, some productions – like this one – have cast women to play the role of Jesus, a choice encouraged by Schwartz but naturally surprising to many. 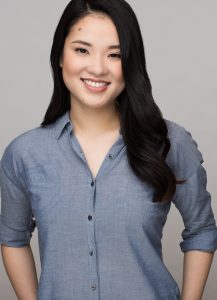 Director Matt Pfeiffer’s concept for this production arises from the idea of a group of performers in an empty theatre coming together to retell and rediscover this timeless story as vividly and immediately as they can.  Because Christianity represents one of the most successful movements, religious or otherwise, in all of human history, it can be easy to lose sight of how small and fragile it was early on, when Jesus and his adherents were the ultimate outsiders — goads to authority, and a threat to established ways of thinking and behaving.  He and they were radicals with the right idea, though fighting against great odds.

So watching an Asian woman take on the role of Jesus (rather than a white man, as is still most commonly done) invites us to consider “otherness”; it helps us question what it means and feels like to be considered an outsider within a dominant culture, long before the “right idea” becomes widely embraced. Moreover, it suggests the spiritual notion that all Christians are called upon to manifest Jesus’s mission on earth, as this popular quote (often erroneously attributed to Teresa of Avila) proposes:

“Christ has no body now but yours,
No hands, no feet on earth but yours…” 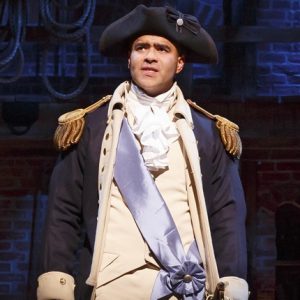 The hit Broadway musical Hamilton provides a similar example of this theatrical device.  By casting actors of color as various Founding Fathers – including George Washington, Thomas Jefferson, James Madison, and the title character — the show’s creators were implicitly asking audiences to consider multiple realities at once:  the historic figure (e.g., George Washington); the idea of that historic figure (“Father Of Our Country”); and the actual person performing the part.  So when we watch Hamilton and see “George Washington” – historically a white man and a slaveholder – played by a black man, we see both the Father of our Country and someone who might well have descended from one of his slaves.

Portraits of these Founding Fathers grace our national currency, and we delight in seeing lookalike re-enactors stroll the streets of Old City Philadelphia, as if these Revolutionary-era superstars walk among us again.  Such likenesses don’t ask us to consider these men in a multi-faceted way; we’re satisfied if they conform to our mental pictures.  But the theatre can aspire to more.  It can make us think as well as feel, to engage with our heads as well as our hearts, and to reconsider our assumptions so that familiar stories and figures – even Biblical ones — may continue to be ever-new.