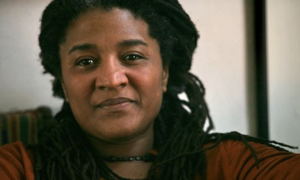 ​During an interview with journalist Alexis Soloski, Nottage told the story of cleaning out her grandmother’s home. Here she found an old passport photo of her great-grandmother and her two young daughters. All Nottage knew of her great-grandmother was that she had been a seamstress and had married a Barbadian immigrant. Nottage began “searching for this woman who was part of the fabric of [her] life, but who was very much a mystery to [her].” In order to solve this mystery, Nottage dove into the music, streets, and people of 1900s New York and wrote Intimate Apparel.

In the early 1900s, the country was in a state of flux. Ellis Island had just opened, allowing a massive wave of Eastern European immigrants into the country. African Americans were also beginning to move north and settle in urban centers like New York City. According to Nottage, Intimate Apparel is about this convergence and the resulting encounters. She was especially interested in how these conversations about cultures were shaped “when they occurred in the bedroom.” 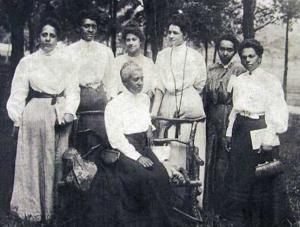 A group of African American women, circa 1906

It is impossible not to notice the almost overwhelming presence of beds throughout the play: “I wanted to see the way in which [beds] impact interactions,” says Nottage. “Even if the bed isn’t used, even if no one sits on it, how does that change the sexual dynamic, the social intercourse?” These depicted interactions may be physical but emotionless, or chaste but familiar, and the feelings of love, loneliness, sadness and loss of self that permeate the script come from Nottage’s desire to write “something simple and gentle” about people who live in the margins of society. “I have a mission to tell the stories of women of color,” says Nottage, “I feel we’ve been present throughout history, but our voices have been neglected.” With this in mind, listen to the voices of those about to take the stage. What stories do they tell us?