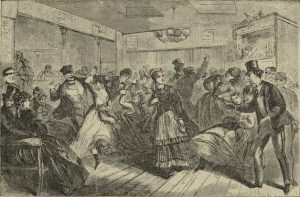 Lynn Nottage’s Intimate Apparel takes place in 1905 Manhattan and follows Esther Mills as she goes about her business as a personal seamstress. Esther’s clientele lives all over New York City and range from the wealthy, upper class Mrs. Van Buren to Mayme, a prostitute from The Tenderloin. Turn of the century prostitution, however, had two distinct faces: brothels and saloons.

What’s the difference between a saloon and a brothel?

At the turn of the century the legal definition of prostitution was not set in stone. That didn’t stop 19th century prostitutes from run-ins with the law, however, public drunkenness, lewdness, vagrancy, indecent exposure, and cursing were all offenses that could result in an arrest.  The lack of a legal definition of prostitution meant that sex was one of the most commercialized vices in New York City during the turn of the century. It was available almost everywhere and for almost any price. 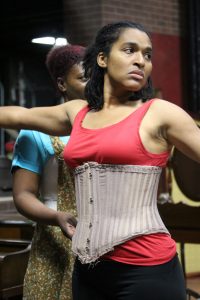 One such establishment where “nightly” entertainment could be found was a saloon. These were commonly found in areas like Five Points, a notorious neighborhood located at the intersection of Anthony, Cross, and Orange Streets in Lower Manhattan. Here, “black and white promiscuously mingled, and nightly celebrated disgusting orgies”(selling sex). One Saloon in Five Points was located in an old brewery next to Murderers Row and prostitutes could rent the rooms above while the ground floor and basement were filled with raucous drinking and live entertainment. This particular saloon was described by a passerby as having, “women, bare-headed, bare-armed, and BARE-BOSOMED in the doorway or on the sidewalk, inviting passers-by, indiscriminately, to enter” (selling sex). Saloons were loud, bawdy, and rough around the edges.

Brothels, on the other hand, presented a unified image to market and could range from a simple boarding house to an extravagant parlor house. As such women would have dress codes and procedures to maintain that image, rules like changing the sheets after each customer or ‘washing up’ in between services. A popular brothel, the Hotel du Wood, was described as “a three story brownstone, furnished throughout with the most costly and newest décor and amenities” the account goes to say that the proprietor “keeps three young ladies of rare personal attraction” and makes specific mention that the Hotel casted to many foreign gentlemen and dignitaries (selling sex).

Most prostitutes, both those in brothels and saloons, had little spending money despite bringing in large sums of cash. Madams controlled the money brought in by those who worked at brothels and those in saloons had to pay rent both for their working room and then elsewhere for the rooms they lived in. All in all, the greatest difference between saloons and brothels comes down to the environment in which they do business in. A brothel has a unified image while a saloon allowed the women to do their own thing. However, both business dealt with sex and who is willing to pay to get what they want.