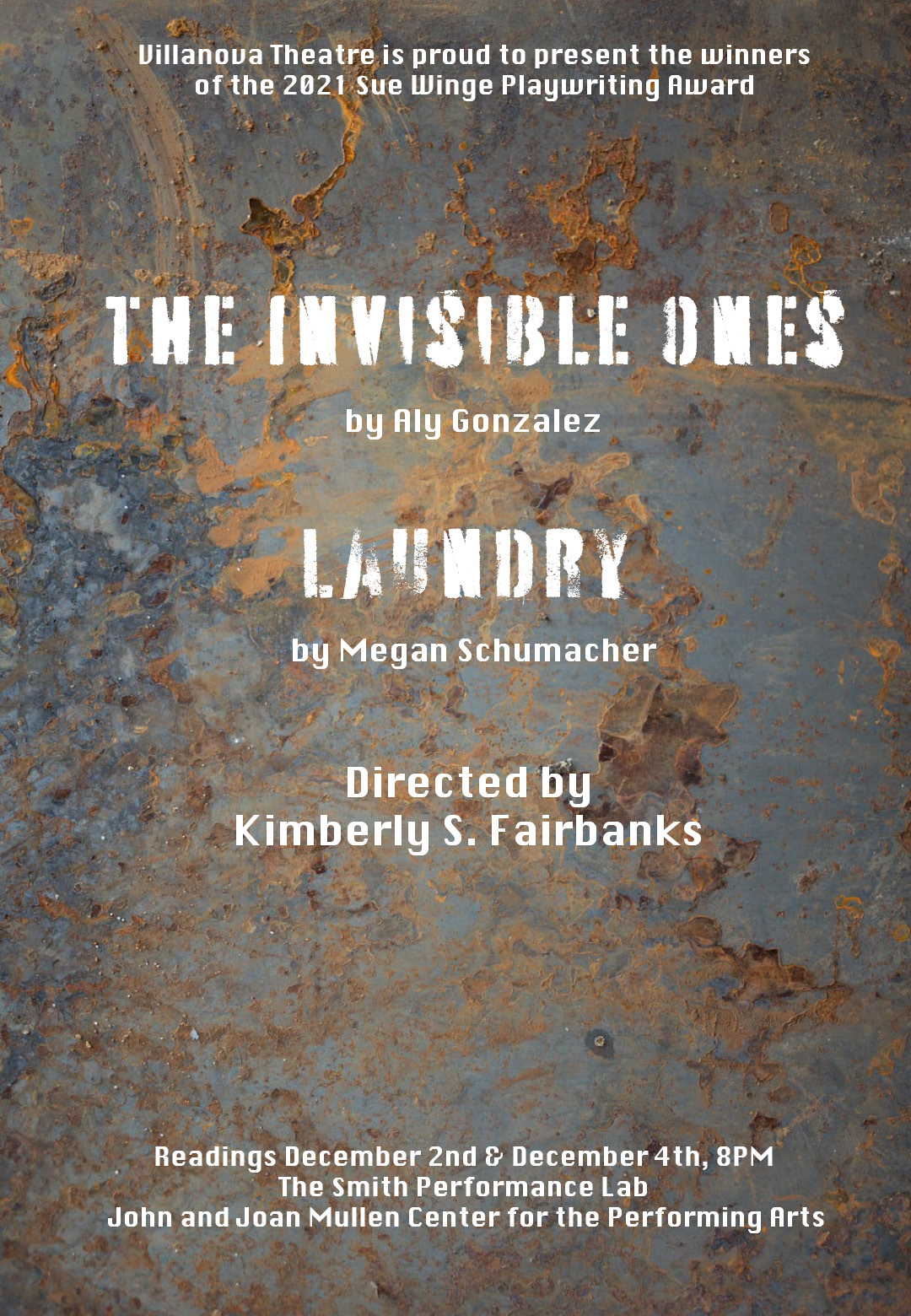 The Invisible Ones by Aly Gonzalez | Laundry by Megan Schumacher

Villanova Theatre is proud to announce our public reading of not one, but two, 2021 Sue Winge Award-winning plays: The Invisible Ones by Aly Gonzalez and Laundry by Megan Schumacher, directed by Kimberly S. Fairbanks on Thursday, December 2nd and Saturday, December 4th at 8PM in the Smith Performance Lab at the John and Joan Mullen Center for the Performing Arts. Schumacher (MA ’18) is a proud alum Villanova MA in Theatre, and Gonzalez is a current graduate student expecting her MA Fall ’21.

We're really delighted to be able to confer this year's Award on two playwrights with very different, yet equally engaging, theatrical visions,” says Villanova Theatre Artistic Director Michael Hollinger. “Aly's The Invisible Ones is a beautiful snapshot of two unhoused teens living beneath an underpass, one of whom hopefully pursues a college education despite her strained circumstances.  Megan's powerful Laundry reveals another kind of ‘underworld,’ where five women, stripped of individual identity, labor under a dehumanizing system while struggling to retain their essential humanity.”

Production dramaturg Paul Goraczko remarked on the special qualities both plays have in common: “In Laundry and The Invisible Ones we have two utterly compelling pieces of theatre about people who are marginalized, forgotten, and yearning to be seen. Seeing these plays back-to-back will surely be a thought-provoking experience that audiences won't want to miss.”

The Sue Winge Playwriting Award was established in memory of beloved Villanova University employee Sue Winge, who served the University for many years in the Theatre Department and the President’s Office. The award annually supports the creation and development of new plays at Villanova University, including the recent Bakkhai Variations commissions and workshop of Julia Izumi’s Sometimes the Rain, Sometimes the Sea. Previous winners of the Competition include m4m by Mark Costello (MA ‘10), Reveille by Jessica Bedford (MA‘10), Pancake Queen by Brie Knight (MA‘14), Fluttering Pulses by Patrick Walsh (BA ‘16) and Fondest Wish by Kevin Esmond (MA ‘17).

Like all good art, White asks audiences to engage with universal questions on a personal, sometimes challenging level. At the same time, please do note that there is a difference between trauma and discomfort. Without the latter, we can narrow and limit our experiences in ways detrimental to ourselves as individuals and as members of this community. Please use your best judgment and exercise self-care as needed.